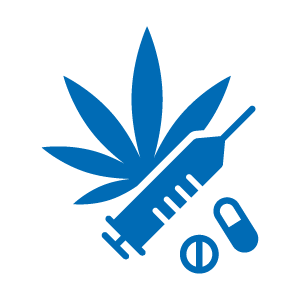 Cannabis and other drugs

Cannabis is the most consumed illegal substance in Switzerland. This mostly concerns adolescents and young adults. Excessive consumption may lead to health problems and psychological dependence.

Many other drugs such as heroin, cocaine, ecstasy or amphetamines can lead to psychological and/or physical dependence and to health problems.

Indicators for cannabis and other drugs are defined in the national strategy "Addiction". They describe the situation in regard to consumption, impact on health and the society as well as in regard to treatment. The population’s knowledge and opinion on the legislation are also described.

The data are presented in interactive graphical form with links to the sources.

Substance use and psychological distress (age: 15-74)

Offences against the Narcotics Act due to consumption

Offences against the Narcotics Act due to dealing

The economic cost of addiction

Hospital admissions with main or secondary diagnosis of substance-related disorder

4
Other
Children from families with heavy substance consumption (age: 0–14)

Traffic accidents under the influence of substances